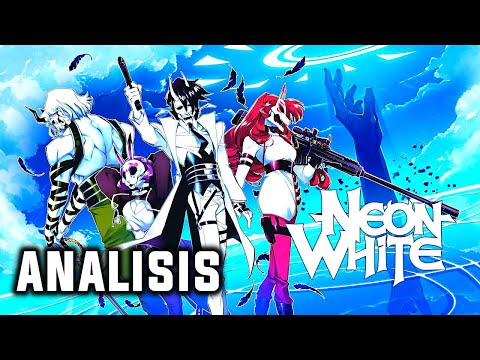 Neon White is a first person Shooter about a group of masked murderers, the neons, who try to win the entrance to heaven participating in a competition to kill demons that lasts ten days, the last before the final judgment. Your avatar, the white neon (hence the title of the game), suffers amnesia; Although you suspect that you know the rest of the Neons of something, the only thing obvious is that you do not remember anything, that there are ten days for the final judgment and that you are participating in the twisted proof that Los Angeles have organized, so you have to play your cards.

Play them in a figurative and also literal way. Neon White is a shooting game in which guns and submachine guns are letters, which can be played to shoot or discarded to activate their secondary function and remove them from your hand. It is one of those simple but so specific ideas that it seems that they should be natural. First give you a gun, which works like any gun of any video game but that activates a jump if you discard it; The double jump, thus, is a mechanic that depends on having a gun letter in your hand, and triple or quadruple, because you can have up to three equal cards in your hand at the same time. Then they give you a rifle, more or less the same rifle as that of any video game but that when it is discarded, it launches a grenade that sticks to any enemy or surface, and that allows you to boost even more if you use the explosion for it. Each weapon offers you an offensive possibility and one of movement, sometimes even both at the same time: each letter is a piece of the puzzle that is presented through the design of levels, its platforms and its enemies. The goal, after all, is to kill demons, the argument tells us; But you also have to move quickly, according to the structure, which encourages you and even force to get medals overcoming the times of each level.

It is a structure that acts as funnel to take you to the ideal type of departure of Neon White, which is based on the overcoming of objectives, aim and time, but that grows in many other directions. There is a layer of visual novel, this does a tribute to certain JRPG classics through which it deepens, above all, in the past of the characters, in their relationships and in the memories that White can recover as time passes with them. Finding gifts and offering them to other Neons not only squeeze the levels a little more, proposing another way to travel them, another optional layer with their own logics and their own puzzles; In addition, among the rewards are even more levels with their own logic and their own puzzles. In my case, I went for the gameplay and I stayed for a script that is not even less intelligent for wanting to be agile and light nor less agile and light for wanting to be intelligent. It is a distribution of weights between frantic platform in the first person and static and linear narration from which it is difficult to go well, but Neon White goes out with his (again).

And he doesn’t even count anything particularly new or revolutionary, but he does so in such a convincing way that he leaves a mark. The characters transmit personality, and put together a network of bizarre but consistent relationships; The same thing that happens to the shots and platforms, which also ends up having that impossible cohesion that some of those browser games that grew as mushrooms in the nutritious lands of the Internet in the early 2000s, or the best Dreamcast games had. It is unforgettably Martian. He has some mod of unreal tournament and some of skin of Winamp.

It is a game committed to what it proposes, and for me that is its great key. Each of its pieces has a purpose and works feedback from the others, and in the long run they have the same weight. None is totally secondary: obviously the platform and the aim seem to be the base, but the relationships between characters, the medals and the collectibles do not seem subordinates at any time; Rather, they are reinforcements or relief, and not optional because without them it is impossible forms the complete image of Neon White. It is better understood with an example of another game with similar vibrations: remember what happens in Hades, where good synergies are also formed between gameplay and narrative.

In my opinion, it is that coherence that ends up giving a good game el fua that elevates it a little beyond the many other good games that exist in the world. Neon White has it; In the first five or six hours, which it takes to finish the game, there is more than evidence; In the next six or seven, you discover that there are more than you thought and as you explore it, the connections between their pieces are strengthened; You may not consider yourself sufficiently Freak before starting to play, but at this point you are likely to be and that you still have another handful of hours to complete neon White. It is something that you want, and that in my case it emerged organically, without almost proposing it. I just kept playing and finding things: collectibles, dialogues, secrets; new shortcuts and strategies to scratch a second more in the leaderboards; Even mechanical or level types that the game had had in the bedroom for hours, waiting to be found, totally unnecessary when you know us but essential once you have seen them for the first time. Nothing squeaks. Everything sounds good.

In 2010, the Arcane Kids collective was born, a group of (at that time) students with interest shared by video games, the undergy and Dreamcast movements. They developed several video games that had a lot of impact, from Zineth (their end of the race project) or Perfect Stride to Room of 1000 Snakes or Bubsy 3D: Bubsy visits The James Turrell Retrospective. All of them function as implementation of the manifesto in which Arcane Kids summarized his design philosophy:

In 2015 CRAP was published! No One Loves Me, Arcane Kids’s last game before the group began operating in a different way. A year later, in 2016, Ben Esposito, one of the founding members of the collective, published Tattteleil; In 2018, already under the umbrella of Annapurna Interactive, he launched Donut County, in which he also participated, although in a more secondary role, another of the founders of Arcane Kids, Yuliy Vigdorchik. Five years ago the group does not give signs of life; It will dissolve or not, since 2017 the inactivity is total.

But in Neon White there is again traces of Arcane Kids, as there were in the humor of Donut County. There are several Arcane Kids in the credits, in addition to Ben Esposito: there are Russell Honor and Tom Astle, programming but also, in the case of honor, depending on game designner; Also, this time only in thanks, Yuliy Vigdorchik can be found, as well as Glitch City, the other Los Angeles collective in which Arcane Kids probably dissolved, after all. The fact is that I have not stopped thinking about Arcane Kids while playing Neon White: in some way, it is the culmination of many of the ideas that the group was rehearsing in its active years, from its unwavering commitment to the movement to the movement to the Oblique use of humor to substrate ideas and to shape a space.

Neon White is, indeed, a game that could be from Dreamcast: vibrant and with a very marked personality, easy to understand but difficult to dominate, complex not despite their simple mechanics but thanks to them, to the great imagination with which he squeezes them and combine. It is a game for Freaks, by Freaks, they said in their promotional materials; I do not doubt that those responsible are, but of course it is not necessary to be, a priori, a freak to find in Neon White one of the great games of 2022. What is likely that when you finish it you discover that you discover that There was a part Freak in you that you did not know? Of course. _One of us, one of us! _